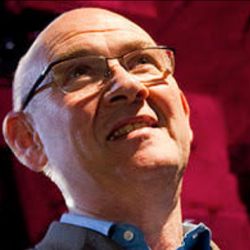 Professor Jeffrey Shaw (1944 Melbourne) has been a leading figure in new media art since its emergence from the performance, expanded cinema and installation paradigms of the 1960s to its present day technology-informed and virtualized forms. In a prolific career of widely exhibited and critically acclaimed work he has pioneered the creative use of digital media technologies in the fields of virtual and augmented reality, immersive visualization environments, navigable cinematic systems and interactive narrative. Professor Shaw was co-founder of the Eventstructure Research Group in Amsterdam (1969-1979), and founding director of the ZKM Institute for Visual Media Karlsruhe (1991-2002). At the ZKM he conceived and ran a seminal artistic research program that included the ArtIntAct series of digital publications, the MultiMediale series of international media art exhibitions, over one hundred artist-in-residence projects, and the invention of new creative platforms such as the EVE Extended Virtual Environment (1993) PLACE (1995) and the Panoramic Navigator (1997). In 1995 Shaw was appointed Professor of Media Art at the State University of Design, Media and Arts (HfG), Karlsruhe, Germany.

In 2003 Professor Shaw was awarded the prestigious Australian Research Council Federation Fellowship and returned to Australia to co-found and direct the UNSW iCinema Centre for Interactive Cinema Research in Sydney from 2003-2009. At iCinema he led a theoretical, aesthetic and technological research program in immersive interactive post-narrative systems, which produced pioneering artistic and research works such as Place-Hampi and T_Visionarium, the latter shown at the Biennale of Seville in 2008. In September 2009 Shaw joined City University in Hong Kong as Chair Professor of Media Art and Dean of the School of Creative Media (SCM). Professor Shaw has a position at UNSW as co-director of the iCinema Centre for the purposes of academic and research co-operation with CityU. He established a SCM research facility at the Hong Kong Science Park in 2010.