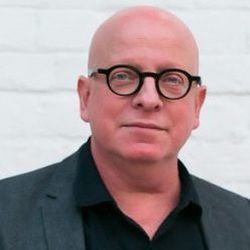 Artist, theorist and curator, Maurice Benayoun (MoBen, 莫奔) is a pioneering figure in the field of New Media Art. Prof. Benayoun’s work freely explores the boundaries of media, encompassing video and virtual reality, interactive, mobile, urban media and large-scale public art installation. Prof. Benayoun’s work has been exhibited and awarded (Golden Nica Ars Electronica 1998…) in many major international museums including the Centre Pompidou in Paris, the museums of contemporary art in Lyon, Montreal, Seoul and Helsinki, Eyebeam and Museum of the Moving Image in New York, the Machida Museum, the ICC Tokyo, including the permanent exhibition inside the Arc de Triomphe, Paris, and Curator of the Open Sky Gallery on the ICC Tower media façade, HK.

From the Tunnel under the Atlantic to NeORIZON giant urban installation, (Shanghai 2008), and major works like World Skin, a Photo Safari in the Land of War (Golden Nica, Ars Electronica 1998) and the Mechanics of emotions, Prof. Benayoun’s work tries to exceed technology, exploring new ways of creating meaning through experiencing intense metaphorical situations.

After his first exhibitions in Asia, ICC Tokyo 1999, he started developing the concept of “Critical Fusion” as a way to interrogate all fields of human activities at the artistic, economic and political level. Moben’s first exhibitions in China was in 2005 while he simultaneously exhibited the first part of the Mechanics of Emotions grand œuvre, converting symbolically the 700 sqm of 18 on the Bund gallery in Shanghai - into a luxury shop with e-Market, Emotional Market, and presenting a giant installation in the Shanghai Science Museum with Cosmopolis installation which attracted more than 10 000 people per day. This exhibition, one of the major events of the French Year, toured around China and was the opening exhibition of the 3 Gorges Museum in ChongQing, before being presented in Chengdu and Beijing. Neorizon, his last exhibition in Shanghai, was a large-scale street installation on Century Avenue during eArts Festival 2008. On September 2014, MoBen co-curated with Jeffrey Shaw the Fleeting Light Large Scale interactive art exhibition including the first artist’s work of the ICC Tower giant urban media screen by Jim Campbell. This experience in Asia was the origin of important mutations in MoBen’s work and largely it motivated his decision to move to Hong Kong in 2012.

MoBen is currently a Professor at the School of Creative Media, City University of Hong Kong and Chair of Graduate Studies Committee.