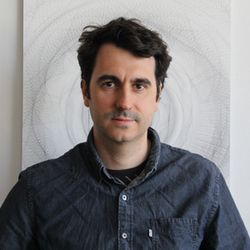 He is a co-founder of the art collective Derivart, working in the intersection between finance, art and technology and also co-founder of Lummo, a small studio of new media architecture. Together with Vavara Guljajeva he is working as an artist-duo.

Canet Sola and Guljajeva’s work is concerned with new forms of art, and in particular the playfulness of expression which technology can provide within this context. They apply and challenge technology and traditional production methods in order to explore novel concepts in art, often using computer programming, hardware design, and research to create interactive new media installations and projects.

As a duo their works have been exhibited in a number of international shows and festivals, and they have been selected for numerous artist residencies.

Mar Canet developed within the artist collective Lummo Team the networked project LummoBlocks which connected Madrid and Berlin in real-time in the framework of the Media Facades Festival 2010. In 2013 he developed together with Varvara Guljajeva the project ‘Binoculars to… Binoculars from…‘ which was shown simultaneously in over seven cities in Europe and beyond within the Connecting Cities Network. In 2013 the artist duo also developed the project ‘Rhythms of Sao Paulo‘ during the SP_Urban Digital Festival in Sao Paulo.