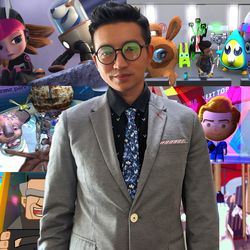 Peter Chanthanakone is an award winning director and producer specializing in 3D animated short films. He won numerous film festival awards and his works has been selected in major film festivals around the world such as Germany, France, Austria, Canada, China, Belgium, Brazil, Portugal, UK, Slovakia, Moldova, Cuba, Switzerland, Spain, Thailand, Laos, S. Korea, Czech Republic, Croatia, Ukraine, South Africa, Hungary, Greece, Pakistan, India, Australia, Taiwan, Jamaica, Italy as a retrospective at the 2013 VIEW Animation Video Festival and on a giant screen in Times Square in the NYC International Film Festival. Cumulatively, his work has been selected in over 65 international juried competitions. He is also a jury member for the prestigious Electronic Theatre for Siggraph Asia and director and producer at RiFF Animation Studio in Bangkok, Thailand.

He was born in Niagara Falls, Canada and obtained his BFA at McMaster University (Canada) in Fine Art/Multimedia and completed his MFA at the Academy of Art University in San Francisco in Animation.

In his spare time, he operates RizingZun Animation, an award winning animation studio.