Since 15 March 2021, this page is not updated anymore and serves purely as an archive of previous activities. The webpage of Christian Sandor’s new team is now located at: https://ar-lab.org. 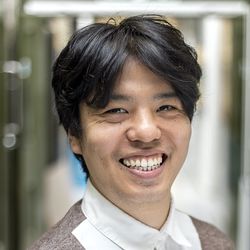 Yutaka Tokuda creates and investigates spatially augmented reality display and new media interface technologies that blur the boundary between physical and digital media. In particular, he is interested in exploring 3D floating display systems and programmable materials that control the appearance, sound and tactile feeling of holographic or physical 3D objects. He has worked on multidisciplinary display and interface design projects in both academia and industry, including The University of Tokyo, University of Sussex, Utsunomiya University, Microsoft Research, Google and Panasonic. He received a PhD degree in Engineering at the Research Center of Advance Science and Technology (RCAST) in The University of Tokyo on March 2020 under the supervision of Prof. Michitaka Hirose.