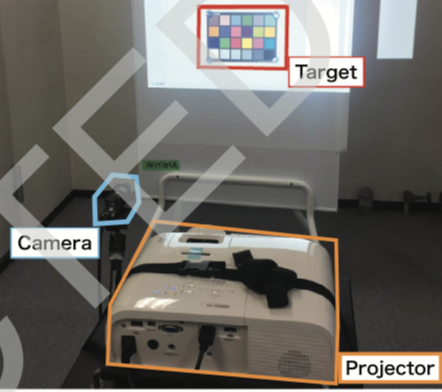 With projection mapping, we can control the appearance of real-world objects by adding illumination. A projector can be used to control light reflected from an object, where the reflected light depends not only on the projection but also on the reflectance and environmental light. Because the resulting colors are affected by the reflectance and environmental light, the presentable color range of a projector is limited. The purpose of this work is to broaden this limited range by focusing on the perceived colors. Although our eyes capture reflected light to perceive the colors of an object, the colors perceived by humans are not always the same as the actual colors, and there are often significant differences between them because of the human visual system. To overcome the limitations of a projector based on human perception, we intentionally generate this difference by inducing a visual illusion, namely, color constancy. In this work, we designed an algorithm to determine the projected colors for presenting the desired colors perceptually by employing a color constancy effect. In addition, we conducted a user study and confirmed that our algorithm can (1) create a misperception regarding the color of illumination, (2) broaden the presentable color range of a projector, and (3) shift the perceptual colors in the desirable direction.